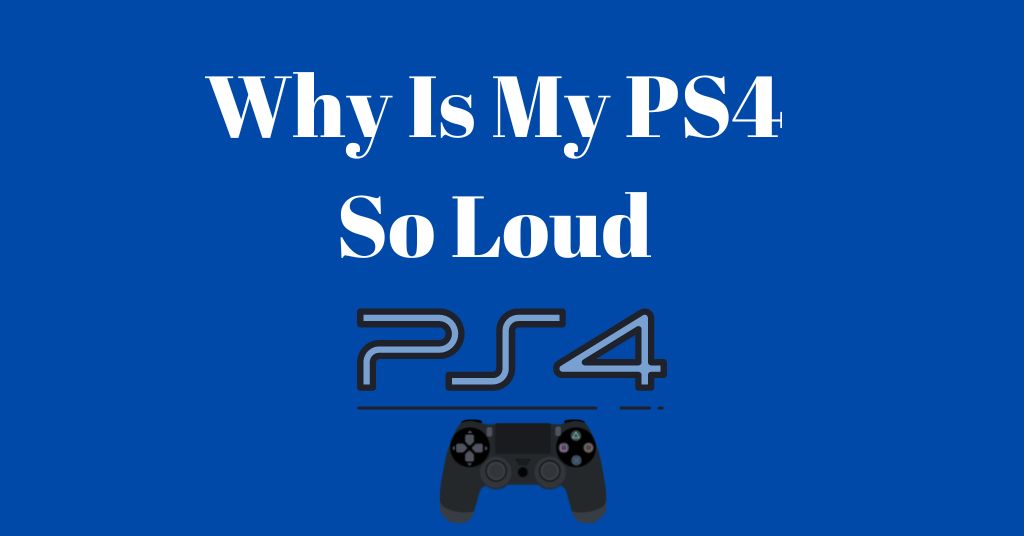 Why Is My PS4 So Loud? The Answer is PlayStation 4 is one of the greatest gaming systems of all time. Despite its excellent technological design, it will surely become noisy. It’s a regular issue for Sony’s eighth-generation system users. Depending on how frequently they use it, their PS4 will eventually start sounding louder than a jet engine.

It not only becomes annoying, but it also raises concerns about the system’s health. Fortunately, there are solutions for dealing with this issue when it arises, as well as ways to keep your PS4 purring like a kitten for a longer period of time.

Why Is My PS4 Fan So Loud

Hard drives, cooling fans, dust, highly-intensive games, and old or broken consoles are all possible causes of PS4 fan noise. Now we’ll go over each one in depth:

Your console’s hard disk might be the source of the loud noise. It is most typical while the platters are searching for data.

The hard disk producing a lot of noise is a bad sign. It’s an indication that your PS4 hard disk isn’t performing properly. As soon as you recognize the problem, you must address it.

Another reason Why Is My PS4 So Loud is dust. You can’t escape the dirt or dust that is all around us. You can clean the outside, but airborne dust seeps into your console as well. The louder the PS4 console grows as more dirt enters it.

The remedy is to use a dust cover, such as the Foamy Lizard Dust Cover, to clean it thoroughly. The advantage of this Foamy Lizard cover is that it fits the original PS4 console.

The dust cover cannot be used when the console is turned on. Instead, use it to keep dust out of your system while playing video games. The soft fleece inner lining of the leather-textured dust cover resists dirt, liquid, and dust. The back panel protects the device without removing the cables from the back. Do you know we also have a solution if your Youtube Not Working On Ps4

The cooling fans are one of the primary causes of the PlayStation game console’s noise. As the console, processor, and motherboard create heat, the fans rotate to keep the computer cool.

If the cooling fan is loose, dusty, or slow, it generates noise. The noises could be loud, and your PS4 may not be cooling as quickly as it should. It will shut down as a result of overheating.

Over time, the PS4 accumulates dirt, dust, and lint, which disables key components. As a result, these components cease to function properly. Dust may cause damage to fans and motherboards.

Various components of an old or broken PS4 system will lose strength over time. Most may break down after a considerable period of usage. As a result, the noises made by your PlayStation 4 will get louder. This is usually the source of your controller producing noise. When it comes to the PS4, loud fan noise, dust, and missing parts are all issues.

Games with amazing graphics are entertaining, but they are also taxing on your device. It may cause the CPU to overheat, causing your PS4 fan to spin incessantly.

When this happens, the fan accelerates and attempts to cool the system, resulting in the obnoxious noise users hear. It can also happen if your game is not properly loaded or installed.we also got you the detailed solution if Modern Warfare Keep Copying Add On Ps4

The following are some of the best and most likely solutions to the PS4 loud fan problem, so you can enjoy low-noise and smooth gaming.

Identify the source of the noise

Before we can implement any remedy, we must first comprehend the problem. So, first and foremost, you must determine what is creating the noise.

Before you install any remedy, be sure you’re dealing with the right issue on your PS4 system. To begin, consider the nature of the noise.

You’ll know it’s the fans if the noise is coming from outside the fan. If your console shuts down due to extreme heat, the problem is most likely with the fan. Your PlayStation 4 isn’t getting enough cooling. Some components are likely to fail if you hear rattling noises.

On the other hand, a whining noise from the hard drive may indicate its failure. This noise can be loud and begins when you turn on or use your system. The sound will continue to play until you turn off PS4.

You are now well aware of the sources of the loud noise. It’s time to put the following fixes or methods into action to reduce the noise.

Place your console in a well-ventilated area

When your PS4 starts to heat up, the fan kicks on. The fans speed quicker to manage the heat within the gadget. When the console overheats and the fan can’t keep up, it spins considerably faster and louder than usual.

Additionally, do not cover your PlayStation with any things such as bags, jackets, or towels. Don’t place anything on top of it. The only aim is to ensure that sufficient air flows through your PS4 fan. As a result, the system will not have to work as hard to maintain cool.

Keeping your PS4 console in a closed cabinet is never a good idea, especially if you’re gaming. That is a really precise approach to quickly warm up your game console. It will not only make your fan louder, but it may also cause significant damage to your PlayStation 4.

Make use of a cooling stand

Because the PS4’s cooling fan is located at the bottom of the device, lifting it improves airflow. Allow space beneath the console for the fan to rest and relax. You can lift your console with whatever you have available, but you can also purchase a cooling stand.

The cooling stand allows ejected air from the console to escape without colliding with the table. A cooling stand can help keep your system from overheating and extend its life.

Play in a cool location

Because the PS4 heats up on its own when in use, playing in a hot climate is not advised. If at all feasible, maintain it in a temperature-controlled environment.

There have been reports of PS4 owners hearing strange sounds while using their consoles in rooms with temperatures as high as 82 degrees Fahrenheit. For optimal performance, place your console in an area with a maximum temperature of 73 °F.

When your game database is corrupted, the CPU is put to a lot of work. This is one of the reasons why the hard drive begins to produce noises. Furthermore, the CPU begins to overheat.

A similar problem occurs when games are installed wrongly. It starts to fall apart. As a result of the enormous load placed on the CPU, it burns up. When your gadget becomes too hot, the pressure transfers to the fan, resulting in a loud noise.

As a result, you’ll have to work with your database and games to resolve the problem. If the problem persists, reinstall the PS4 system program. This way, you can be certain that system failures are not the source of the problem.

Use a compressed air can

Even if you take every precaution to keep your PS4 ventilated, dust will inevitably gather in its vents and other small cracks.

The only way to get rid of the dust without shutting down your PlayStation is to use a compressed air can. Before proceeding, ensure that the PS4 is turned off and disconnected.

That is the simplest and most efficient method for cleaning out your PS4. This method can be used to clean your console once a month to keep it in good working order.

Make use of a vacuum cleaner

Despite the fact that many PS4 owners have cautioned against using a vacuum cleaner to clear up the vents, the user guide indicates that this is the most effective and safest technique.

Place a vacuum with a tiny nozzle at the rear and side intakes to suck the majority of the dust away.

It’s important to note that even with a vacuum, you won’t be able to get all of the dust out of the vents without disassembling the PS4. If you intend to vacuum your console, wait a few moments before turning it back on to allow the temperature to return to normal.

If working on the device issues and placing the PS4 in a well-ventilated area doesn’t solve the problem, you’ll need to come up with a better solution. You must open the PS4 and work with the components that are causing the noises.

How do I stop my PS4 from being so loud?

Should I be worried if my PS4 is loud?

The fact that the fans are so loud is actually a positive thing. It suggests the PS4 is working hard to maintain a safe core temperature. Remember that your PS4 will shut down if it becomes too hot to operate safely.

How can I make my PS4 quieter without cleaning?

How can I make my PlayStation 4 quieter without cleaning it?
The PlayStation 4 should not be covered at all. Think about mounting your console vertically. Even though it is generally put horizontally, try it the other way around. It could reduce heat and noise, making it quieter.

How do I clear my PS4 vent?

Take your compressed air can and, if it has one, insert the straw for better cleaning. To begin, spray a few blasts of air away from your PS4 in case there is any liquid in the tip. Now, using your canned air, blow short bursts of air all around your PS4, removing any dust.

Conclusion- Why Is My PS4 So Loud

The Question Why Is My PS4 So Loud has plagued the console gaming industry since games began to become more GPU-demanding. Because gaming devices are unlikely to move from air to water cooling, the fan noise will almost surely continue to be an issue in the next console generation.

Even yet, fan noise should not deter any gamer from immersing themselves in their gaming environment for long periods of time. PS4 fan noise is a small issue that may be easily resolved with a little care and the correct environment.

Finding an appropriate approach to fix PS4 loud fan is not a tough issue. I’ve provided several alternative remedies above that you may use depending on the source of the noise.